It’s nearly ten years since the start of the Iraq invasion (you can call it a war if you like, which would be like calling a stairwell nonce bashing a fight), and with the lingering threat of North Korea spoiling everyone’s day by burning the skin from their faces, it led me to wonder how different the world may be had it not occurred.

It’s difficult not to look back on the Iraq situation without mixed feelings. It was probably the end of my love affair with Blair, the relationship had been strained but needlessly murdering thousands of children was akin to not having my tea ready on our anniversary, and so we went our separate ways. Since then Brown has been the steady guy I needed after that and Ed Milliband is the short term guy who just doesn’t get my crotch wet, as his brother is my main target of lust.

I still find my mind drifting to Blair, missing him in the cold of night. Mainly because I can ill afford to heat my house in the whole of winter. In many ways he is the true victim of the Iraq war, and by that I’m just going to causally ignore the countless mothers whose children he ripped from their wombs due to fact I have an iPhone to distract me. His whole “legacy” as Prime Minister has been destroyed and you can’t help but feel he wouldn’t have been kept at an arm’s length during London 2012 given his appeal to the likes of the USA if it hadn’t been for his decision to align with Bush.

Perhaps therein lies the double edged sword of the whole situation. Blair is still held in some form of esteem in the US, seen as the thinking man’s religious fanatic. A smooth talking Jesus with smashed in piano keys for teeth, if you will. At one point his opinion polls were so high he could have been elected President.

It’s difficult to understand how anything but a shared love of that famous thriller The Bible, made these two men form such a strong bond. Watching them weekend together in double denim, giving off Ledger/Gyllenhall vibes, would be cute but for the fact that these meetings seemingly forged the plans for a war that would drag on for the best part of a decade.

The problem with religion, is those that follow it think there is something on the other side for us, and so everyone on the planet being wiped out won’t REALLY matter. In their minds it’s a bit like slipping out of a shit party full of knobheads to go to an all brighter with the best women and coolest people.

For people with such a life philosophy, a group of jihadists slamming planes into a building, is really not going to dismay them from the idea that the End Is Nigh and the good fight must be fought before we all turn into piles of clothes at The Rapture. Personally I elect someone to lead, not seek guidance from a higher source. I want my leader to think they ARE God. Cocaine should be an acceptable expense for the PM. Sure, there may be the odd prostitute carried out of number 10 past Nick Robinson in a black bag, but I guarantee there would be clear and concise policies with conviction behind them. They’d just change 14 times a day.

The true belief that this was a fight between good and evil, the holy and the devil incarnate, led Blair and Bush to ignore a million people marching through London, Hans Blix and his team of inspectors and fuck it, the whole of the UN Security Council. You get the feeling that if the UN didn’t sit around shoving betting shop pens into their anuses rather than achieving anything, this wouldn’t have happened. Unfortunately Bush wasn’t the kind of guy to wait around and so began Shock and Awe.

I remember watching the bombing of Baghdad from behind a bar in a pub I worked and genuinely feeling we’d gone a tad far. I like a good carpet bombing as much as the next guy but this looked like a Busta Rhymes video. The war was supposed to be nice and easy of course, as history has often taught us that such events are like a routine cup win on a Wednesday.

But of course it didn’t end that way. We are left with a world that genuinely has the fear of nuclear war, it isn’t safer, as much as they protest.

There were days after September 11th when even the Russians were helping the USA and it has to be a hugely wasted opportunity, and it in that sense I sound as casual as the people I hope North Korea will wipe from the face of the earth.

As I speak the USA is strengthening its defences, but I ask, where does that leave us all? It always confuses me that someone in power is required to be a family man, whilst that they make decisions that will ultimately wipe out my children or future useful sperm.

Right now, Rylan is on my TV and I ask you, what did we really achieve? A nuclear treaty that allows him to live?

I think not. Because he alone is cause for the end of the world. 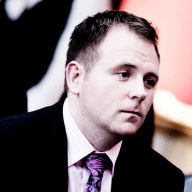