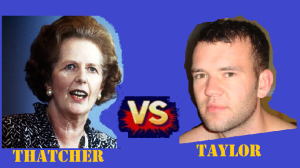 1981. The year of the big bang. Mr and Mrs had enjoyed an unplanned, yet particularly fruitful night out around March ’81. Little did they know that their impromptu evening in The Sheffield Steel Workers Union Bar, would have such an impact on the political and social landscape of a yet unknown 1980’s.

A bleak winter in 1981, a child was born. A child just like any other. 10 fingers, 10 toes and 1 brain. Oh but what a brain, what was in that little infants head that could cause Margaret Thatcher such problems? Mrs Thatcher’s spiritual guide and long time advisor had the paranormal knowledge to warn of the birth of a new voice. A voice that could, if left to its own devices, could cause political unrest in the future.
Lets have a look at the families history now. Mr Taylor was working as a successful steel worker during a particular prosperous time during the 80’s. The work was backbreaking, but he knew that it would be worth it in the long run if it meant that his son wouldn’t have to follow in his footsteps.

Maggie Thatcher knew that the child would, as foretold by her medium ‘Madame Foresight’ would become the future charismatic leader or the Labour party. She knew she had to act, and act fast!

Her first act, remove the father, but how could she do this? luckily, Mr Taylor was a member of the Territorial Army. The timing couldn’t be better. The Falklands conflict was brewing at the start of the 1982. Maggie organised the full war to get the one biggest influence out of an as yet juvenile Master Taylor’s life.
As it turns out Mr Taylor’s skills as a Royal Marine rope knotter were never required on the islands. No sooner had he been deployed, he was back at home with his fledgling family, and back in the Sheffield steel mills.

Her plan had failed! Knowing that the future opposition leader was in the clear, she needed a new plan. The evil bitches attention turned to his mother. Mrs Taylor was working down the coal mines in Nottingham, she was one of the only women at the time working in the collieries, a role model to others. If Thatcher could get his mother out of work, it could break his spirit and he may not further him self as Labour’s new protégé.

Maggies plan to cause unionistic unrest down the pits backfired. Mrs Taylor’s and her colleagues resolve was strong in the summer of ’84. The battles with the authorities during the long hot summer months were bloody, but the collieries stood strong. After all the battles, she decided to quit her job anyways. Mrs Taylor got a job working on the lingerie counter in C & A’s until it closed in 2001.

So far the Prime Ministers attempts to tamper with the future ‘Right Honourable M.P Martyn Taylor’ had been a failure. A visit by Thatcher to her trusted psychic resulted in ‘Madame foresight’ predicting a new future for the Sheffield steel industry, privatisation. In 1988 her privatisation plan was put into place for the steel works of Sheffield. This caused Mr Taylor to be made redundant.

Her secondary plan had prevailed. surely now with his father figure a dole bum, Martyn would never make anything of his life. Unfortunately for ‘The Iron lady,’ Mr Taylor was a shrewd business man. He took his pay off from the steel works and moved to Hull with his family. The redundancy money was invested Wiltshire Caravans. Wiltshire Caravans became a roaring success.
Bad luck Thatcher!!!

Martyn Taylor left Kelvin Hall School as ‘head boy’, went on to Wyke
College, where he attained his A levels. He was accepted at Hull University, where he studied politics and philosophy.
Unfortunately, during the summer of 2001, Martyn discovered Sex, drugs and rock ‘n’ roll. He now goes by the name of Lee Langman!

AUTHORS DISCLAIMER!!!!!!! I may have made a slight portion of this story up a wee bit. I’ll leave it up to you to decide which parts…

One thought on “The Big Bang…. By Martyn Taylor”