It seems the terminally paranoid, curtain-twitchers of middle England have at last found a messiah to lead them to the promised land. A land of morris dancing, afternoon tea, cricket on the village green, and where corner shops are all run by white people. I am of course referring to Nigel Farrage – the Lazarus of right wing politics. Not since Robert Kilroy Silk’s Veritas has there been such excited anticipation in the safe, leafy suburbs of conservative England. Anticipation, in that case, which quickly evaporated after it became patently clear to the electorate that Silk had the credibility and political acumen of a diseased chimp. Although Veritas shared UKIP’s preoccupation with Europe and Immigration, Kilroy just didn’t possess the drive, ambition, and pure charisma that only a man named Nigel can exude. Or perhaps it’s more to do with the fact that Farrage benefits from the distinct advantage of not having the image of him covered in horse manure seared into the collective public conscious – such was the fate that befell Kilroy at the hands of a man who didn’t exactly share his political views. To quote Paul Merton – A case of the shit hitting the tan.

So I have recently found myself imagining the metaphorical bucket of shit that might await Farrge when the country returns to normality, and steps back from the edge of economic meltdown. Because if there’s one thing above all that UKIP has benefited from, then it’s the biggest recession in nearly a hundred years. The historic relationship between economic decline and the rise of right wing politics is nothing new and is well documented through the 20th century – all the way back to the the great depression and the rise of fascism in Europe. Immigrants have always proved to be very convenient scapegoats, and so continues to be the case today. Poles were all very well when they paid their taxes and people praised their work ethic, but when people start losing their jobs, things turn nasty. Generalisations about ‘hard workers’ quickly changed into ‘lazy benefit scroungers” intent on milking the system. People can be so fickle.
On one level, it’s only natural for people to find someone to blame – to point the finger at. Im just not sure everyone is looking at (or being directed to) the right place. Its not as though recent events in the news haven’t given us subtle clues either – the expense fiddling politicians; the self-serving bankers; the corrupt tabloids tapping the phones of murdered children; the tax avoiding multinationals etc. On reflection, I just don’t find myself worrying too much about Eastern Europeans scrabbling over minimum wage cleaning and manual labour jobs.

As anyone who has been affected by recent pension reforms will tell you, the UK is changing – or as Principal Skinner from the Simpsons would say, “the times they are a-becoming quite different”. The effects of the post war baby boom have at last caught up with us, and a now aging population means that there are more people going into retirement then there are going into work to pay for them. It would seem that the UK is in a position to be grateful for all the people of working age it can get . But no, none of this seems to matter to old Nige, and the dangers of Johnny Foreigner (whether it be Immigrants, or those pesky Europeans wanting greater union) continues to be the number one issue for UKIP, and an increasing number of the Great British public. Perhaps its the isolated incidents and anecdotal evidence that are carefully selected and presented as the norm in ‘newspapers’ like The Daily Mail that are to blame. Or perhaps some people are just unable to understand and differentiate between asylum seekers and immigrants, or between a person’s nationality and their ethnicity.

This isn’t, of course, a phenomenon isolated to the UK. One only needs to look at the current political landscape in Greece, the cradle of democracy and enlightened thought, for evidence of that. Golden Dawn is a Greek political party that adopts an emblem that has more then a passing resemblance to the Swastika, and policies that make Nick Griffin look like John Inman. In one now infamous incident, one of the Party’s members adopted the unconventional debating method of punching a female panelist whilst appearing on the Greek version of Question Time. In the 1996 Greek General election the party registered approximately 0.1 percent of the vote. A figure that remained stable all the way through to the 2009 election showing of 0.3 percent. But when the shit really hit the fan in 2012 their share leapt to 7%.
Fortunately, the BNP have never been able to get a foothold in British politics. Their image of being populated by racist neanderthals has never really sat well with the voters of middle England. Long gone are the days of the kind of open racism that saw the “No Blacks, No Dogs, No Irish” signs outside B&B’s. Thankfully we have moved forward. But however abhorrent those views were, there is something strangely reassuring about knowing exactly what someone thinks and where their prejudices lay. Of knowing exactly what you are up against Today people are more happy to surreptitiously hide behind safe euphemisms and cliches like “multiculturalism isn’t working”, or even try a bit of reverse psychology – “you can’t even mention immigration without being called a racist”

But don’t be fooled. The difference between a UKIP and BNP voters could perhaps best be equated to two men slowly getting pissed – one drinking bottles of Chateau Lafite, and the other Diamond White. The mentalities may differ, but the results are pretty much the same. 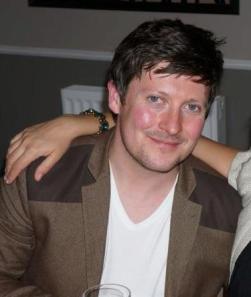 I confess that I don’t know how old Nigel is. I think he’s about thirty-two. He has a baby daughter and lives in Beverley, although I actually think he’s from somewhere in the North-West originally. He is the only other person I’ve ever met who has Yo La Tengo on his i-Pod.