Diamond Dogs isn’t my most played David Bowie album, that honour would go to Low. Nor is it, in terms of song-writing, his best; Hunky Dory takes that title. The reason it is my favourite Bowie record is because it is spectacular, ridiculous, weird and challenging. It is his most interesting album.

Diamond Dogs was recorded around the time of the Cracked Actor documentary, when Bowie was a hollowed out stick figure who was addicted to cocaine and almost completely sleepless. This psychosis and paranoia bled into his music, and Diamond Dogs was originally an attempt to write a musical version of George Orwell’s 1984, one of the most paranoid books ever written. The following year, when he starred in The Man Who Fell To Earth, in which he played an alien who was horrifically uncomfortable with everything around him, he was basically playing himself.

The fact that he was able to play two hundred shows a year and still record some of the greatest music ever made is a testament to either his doggedness or the quality of the shit his drug dealer could get his hands on. Diamond Dogs is admittedly patchy, but it is a phenomenal artistic achievement, an amalgam of Glam, Krautrock, Rock n’ Roll and cabaret, hung together on a loose narrative about a post-apocalyptic city where “Fleas the size of rats suck on rats the size of cats.” It is bookended by a distorted beatless spoken-word  scene-setter called Future Legend and chugging bass-heavy mantra The Chant Of The Ever Circling Skeletal Family; two non-songs, an incredibly brave step for the most famous rock star in the world. Having said that, it also contains two of his best rockers (it is a little-known fact that Bowie himself played lead guitar on this album) in the title track and Rebel Rebel and the string-laden whip-smart funk epic 1984, so there was commercial appeal in there somewhere.

It is the three song suite of Sweet Thing, Candidate and Sweet Thing (Reprise) that shoots this to the top of the Bowie chart for me, though. I simply do not know how you sit down and conceive of writing a song like this. There is no conventional structure anywhere here, but it is home to the best vocal performance in all of rock, a soaring and spiralling tune that would not be repeated until Mr Anderson hit the acid twenty years later. It still sounds so fresh and original, and while the work of his early seventies peers such as Deep Purple and The Sweet now sound like terribly dated novelty records, this sounds like it was recorded yesterday.

Whenever Bowie’s catalogue is appraised, Diamond Dogs often slips off the radar as it is entirely self-contained and has neither the impact of Ziggy Stardust or the diversity of the fabled Berlin Trilogy, yet it could be argued that it out-scopes them all. And in terms of the influence it cast, you can bet that Depeche Mode, Muse and Marilyn Manson all have well thumbed copies of this record. Bowie is at his best when he is overblown and ridiculous, and here those qualities are to the fore. To finish, if you want an indication of how oblivious and monged out he was when he made this album, have a look at this picture: 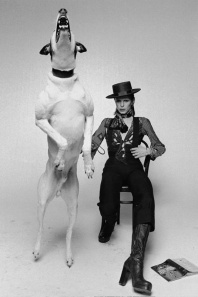 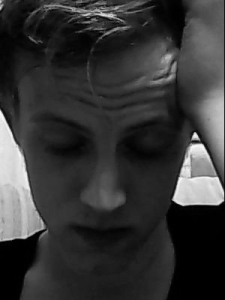 Allen Miles is 31 years old and lives in Hull. He is married and has a 20 month-old daughter who is into The Ramones. He is a staunch supporter of Sheffield Wednesday FC and drinks far too much wine. He spends most of his spare time watching old football videos on youtube and watching 1940s film noir. He is the author of 18 Days, which is widely recognized to be the best book ever written by someone from Hull. It is available here. http://tinyurl.com/8d2pysx