An obsessive compulsive disorder (or O.C.D) is an anxiety disorder, characterized by intrusive thoughts that produce uneasiness, apprehension, fear and worries among suffers. Subsequently, suffers are compelled to carry out repetitive behavioural patterns aimed at reducing stress.

The most common, and therefore, the most known to society are excessive washing of the hands and obsessive cleaning. I myself don’t suffer with either of these symptoms. I have a wife to do my cleaning for me, and I think my hands are clean enough (most of the time).
My O.C.D’s are a little more…. shall we say petty, but equally distressing to me. If I do not carry out these odd ‘tweaks’ my mind could not be at ease.

The last time I checked, I have 6 compulsions which effect me. You may of seen me doing some of these, but I keep some to myself, they keep me sane. If I was caught carrying them out in public, I may well be carted off in a strait jacket!

I know that the world is not going to end if I do not play these mind games, and I know that the ‘Twin Towers’ were not destroyed because I didn’t slap myself in the face (I’ll explain that one later) on Sept 10th 2001.

So here are my O.C.D’s, starting with the least weird and intrusive.

This is my most obvious O.C.D, and the one that gets on my parents tits the most. It also causes my wife to strike me several times a week.
I don’t know how either starts, they can come together, or one at a time. The leg shaking starts when I am relaxed (usually watching T.V or reading). I myself never realise that it has started, but when I see it or it is brought to my attention, I cant stop it! It started for a reason so who am I to stop it. Who knows, it could be regulating my heart or something. Besides, it annoys my wife, so there Vicky!
The tooth grinding is a little more voluntary, but once it starts, I dare not stop. It usually happens when I am concentrating on something or do a repetitive job. I will grind my teeth to the rhythm of the task I am carrying out (and yes, I am doing it now as I type). I know that I am causing irreparable damage to my gnashers, but fuck it, I ain’t stopping, something bad might happen!

This is a simple one this. I have to chew my food an equal amount of time on either side of my mouth or…. well, I don’t know what, but I do it all the same. This may come a s a surprise to my wife, because she says I eat like an animal. Well Vicky, I’m sure even some animals can count, and this animal counts how many times he chews his food!

I count my teeth with my tongue. I don’t mean once a week, I’m talking 50 times a day! Purely to make sure they are all there. 1,2,3,4….30,31,32 yes all there. Sorry just checking now folks. Because of this act, I know my teeth intimately . I know every chip, gap, filling or cavity, and if a new imperfection appears I will lick it until my tongue is sore.
Bloody teeth! I might have them all pulled to save me the hassle. I suppose if I did have them extracted I’d start counting my wife’s every time we kissed…. now there’s a thought!

I’m a joiner, and I work with power tools all day. Quite a lot of the guys I work with have digits missing. When I first started my apprentiship in 1998, I got given the nickname ‘new 10 fingers’ after about a week. Apparently the old ’10 fingers’ didn’t need it any more.
Every time I use a cutting power tool, I need to count my fingers (to make sure I didn’t slip). Its not as easy as 1 to 5 on both hands. I have to count both hands 3 times. Firstly, I count thumb once, index twice, middle 3 times, wedding twice and little once. That’s the first count. Then I do, index twice, middle 3 times and wedding twice. That’s the second count. finally, I just count the middle 3 times. Remember that’s both hands people, but I can do them both hands at the same time. Its crazy, I know.

Nobody will have ever seen me doing this, but all day long a draw the shape of a crucifix on the roof of my mouth with my tongue. I can’t do it in lines, I have to do it like a dot-to-dot diagram. I ain’t even religious, but if it gets me into heaven, bonus. If not I’ll just be worm food.

My final and most obvious impulse. I slap myself in the face, not hard. More like a little wake up slap. I will do it involuntary while waiting for something to happen. Maybe I’ll be waiting for a microwave to ‘bing’ or a computer game to load and sure enough, there it is. 4 slaps, both hands on my eyes. I don’t even know I’m doing it until its done.
Its gotten to the point where the only way I know I’ve done it is because my wife will be laughing at my 3 kids copying me whenever I do it!

That’s the all folks. So don’t worry, I’m not crazy. Just a little weird. See how many of my ‘tweaks’ you can spot next time we meet. 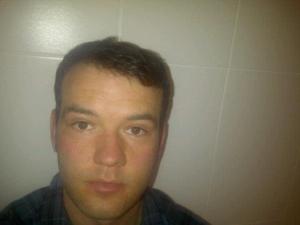