I hate sexism. It’s still a very real problem in society, one that needs to be dealt with head on. But if there’s one thing I hate more, it’s the people who claim EVERYTHING is sexism. You see them out there, picking everyone’s behaviour to bits like some kind of radioactive-hyper-feminists. It drives me mad. Everything is not sexism, and not all men are sexist. Some women are also sexist…probably more than you think.

I work with the public on a daily basis, I speak to an awful lot of people, from all different backgrounds. Most people are nice, some are indifferent, a few are arseholes. Of these unfortunate few (unfortunate for the rest of us, anyway) what you really need to remember is that these people are not arseholes because they are sexist, they are sexist because they are arseholes. Just as many women have the potential for acting like utter c*nts as the men do. Proportionally it’s a fairly even split.

Inverse sexism is often the worst, because nobody seems to see anything wrong with it. As an example I posted something on my facebook wall, detailing a situation that happens fairly frequently in my line of work. It goes something like this:

Eleven people liked that post (which is a lot for me). Ten of them were women. TEN. They’d missed the point entirely – I posted it because I was getting a bit annoyed, they just thought it was funny.
And THAT’S the point. Why is this deemed acceptable, even expected behaviour?
It manages to both put the woman in a position of power and dependency, while reinforcing the typical male stereotype as provider AND making him look the ‘under the thumb’ (another classic stereotype). Brilliant. Well done girls. Free stereotypes all round! Let’s all eat chocolate and giggle about how guys can’t empathise.
Joking aside though, this kind of thing sets a real double standard, and I for one silently despair every time I’m faced with it.

Accusing people (well, men. Obviously) of sexism all the time is very damaging too. Bias is very easily projected on to others if you are actively seeking it out. There is a major difference between mentioning that someone happens to be female, and acting negatively toward them BECAUSE they are female. Doesn’t everyone know this already? I know this. I am female. I know of at least one guy who became disheartened with his whole career after being accused of a sexist remark. That should never have happened, yet the atmosphere of distrust caused by these so-called ‘equal rights’ activists is such that if you happen to be male, everything you do will be subject to this kind of scrutiny. That doesn’t seem very equal to me.

Apparently Steven Moffat is a sexist because Amy can’t have kids (no…it’s the ONLY thing that could have caused her and Rory to split. They could have made him have the problems, I guess, but it would have been harder to work into the storyline, and I still don’t think he would ever have left her). I have never at any point felt degraded watching Doctor Who, but there are women out there that inexplicably do. Maybe he is a big misogynist in real life, but it doesn’t come across in the shows. Unless you look really, reeeally hard.

It’s all about intent. Holding a door open for someone is not sexist. It’s polite. I hold doors open for people all the time; sometimes I get thanked, sometimes I get ignored, but I’ve never once been accused of being sexist. Or racist. Or any other -ist. So why, when a guy does it, does that suddenly become a feminist issue?

I remember one incident with a male friend of mine, a fair few years back. We were walking back from somewhere after a night out, and I was lagging behind due to a wholly inappropriate choice of footwear. There was a bit of ribbing going on because of this, when some absolute stranger decided the best thing to do was to interfere with this interaction, and started berating my mate for ‘being sexist’ and ‘unchivalrous’. I tried to explain that I was, in fact, having fun, but he was having none of it. He was on leave from the army, he said, and believed that women should be treated with more courtesy. My mate’s response was to turn around, throw me over his shoulder, and carry on walking. The look on the guy’s face was priceless.

Real prejudice exists in plenty of forms, and any unfounded prejudice is just plain wrong. But the idea that we are all perfectly equal is wrong too, or at best misguided. I’m probably not much like you…or him…or her. So why should we expect to be treated the same as everyone else? The true key to equality is to accept that everyone is different, we all have strengths and weaknesses, we are, each of us, unique and wonderful, and this diversity should be celebrated. The sooner we all look around and realise it, the sooner we can create a better, kinder world. 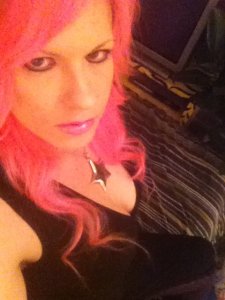 Kelly Brown is never-you-mind years old and lives in a different city every couple of years. Since her late teens she has changed her hair colour an astonishing fourty-seven times. She likes all things to do with space and spaceships and this was before Brian Cox got on the telly.