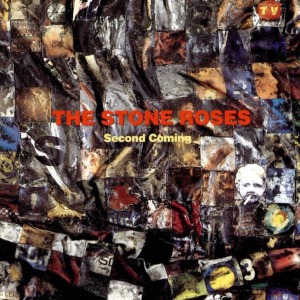 I have been told by many people over the years that The Second Coming by The Stone Roses was a major anti-climax. After much time, hype and anticipation The Stone Roses released their second album in 1994. Fans had been made to wait five and a half years since the release of their eponymous debut masterpiece.

A lot had changed in five and a half years. Gone had the days of The Hacienda and The Happy Mondays, gone had the days of the hazy pop sounds that dominated their earlier release. In had come Parkers, Union Jacks and brash guitar-ladened bands (many of whom were influenced by The Stone Roses original sound).

The Second Coming was a cursed album from the very start, come on, how do you top an album like their debut? Most bands who release something so undeniably brilliant as The Stone Roses album do so three or four LPs into their careers. trying to top the debut was impossible and pointless, so they tried something new. The Psychedelia sounds were dropped to favour a sound of dirty blues-inspired guitar riffs, heavily influenced by Led Zeppelin.

This guitar led blues formula dominates the album, only one song in my opinion harps back to their debut style and that’s Love Spreads. Love Spreads could of slotted into The Stone Roses album seamlessly with out a fuss. Ten Story Love song hints at a psychedelic love revival but falls short where it matters.

John Squires over long guitar solos could be described as self indulgent, but as they say “you cant have enough of a good thing” and his sheer technical prowess shines through. The opening track Breaking Into Heaven shakes with a groove that is trademark Squire (even if the jungle drum intro is a little unnecessary) and is the stand out track of his blues style of playing.

Ian Brown’s trademarked ‘man about town’ likeability and hushed vocals had become more polished on this album. The man could not hold a note to save his life, but he spoke to so many through his lyrics. The opening lyrics and harmonica on Good Times are pure filth from Brown and are my personal highlight from him on the album.

If this album had been their debut, I believed it would of been hailed, (just like The Stone Roses album) as one of the albums of the decade. It had the unfortunate fate of been a follow up, so it’s legacy was tainted from the off.

Luckily, I didn’t have the bias of the reviewers of the time to guide me. I discovered The Stone Roses after their split in 1996 and heard both of their albums for the first time on the same day. I did not have the long overdrawn wait for their follow up which the original fans had to endure. My opinions were made purely from the music, I had no prejudice.

I have always held The Stone Roses debut album in higher esteem than The Second Coming, but don’t let that sway you. The Second Coming is still an amazing album which I still listen to as much as the original release.

“I have a dream, I’ve seen the light, don’t put it out, say she’s alright, yeah she’s my sister.”