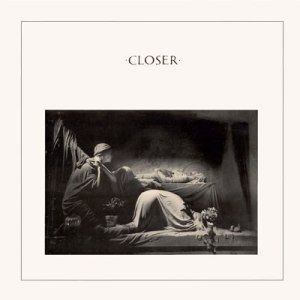 Punk was all over by 1977. The Pistols had imploded and The Clash had developed their sound far beyond three chords and snarling, but in its slipstream a genre emerged that came to be called new-wave, and in 1979 three ground-breaking, visionary albums by British bands would leave a slow burning legacy that would infiltrate not just the UK, but America as well.

The first was Metal Box by Public Image Ltd, John Lydon’s big fuck-you to the punk scene, drawing heavily from dub reggae and krautrock and featuring some of the most bizarre vocals ever groaned and screeched; the second was 154 by Wire, an incredibly bleak experimental tour de force of dense guitars and conceptual lyrics; and the third was Unknown Pleasures by Joy Division, by turns ferocious and spectral, with striking minimalist artwork and a singer who did this on stage. Joy Division sounded like no other band before or since.

Closer, (their second album, pronounced cloz-er) was my introduction to Joy Division. It took me a long time to buy it, as it’s terrifying reputation went before it. It was like buying Schindler’s List on DVD; am I willing to sit down and deliberately make myself feel bad for the duration of this work? I bought it, and the artwork alone is enough to put you in a seriously sombre mood; the nine tracks on the disc however, form a granite monument of complete and utter misery.

The first track, Atrocity Exhibition, is a genuine contender for ugliest song of all time. The sound is so fractured and spiky and generally unpleasant that it is truly difficult to listen to, but some primeval force keeps you hooked. From what I can gather from the cryptic lyric moaned over the military drum beat and needling sheets of guitar, it is a song about bull fighting, although its entirely possible that Curtis is using that as a metaphor for God knows what, the repeated mantra “This is the way, step inside,” putting in place the voyeuristic element that permeates the whole album.

Curtis as a lyricist is unparalleled as one who looks into himself so deeply. No-one else has ever lived and died, quite literally, by his words as much as he did. Yet the flipside is very difficult to admire. Its obvious to all who’ve read up on him that he was a petulant, self-obsessed, narcissistic, ego-maniacal, morally-contemptuous little boy who lived his life like a play. In the Eternal, nine months after his wife gave birth to their child, he sings “Cry like a child, these tears make me older, With children my time is so wastefully spent, Burden to keep… Accept like a curse, An unlucky deal.” Imagine being his daughter, who will now be roughly my age and hearing those lyrics knowing that your dad has written them. How terrible.

Elsewhere, Isolation shows that the seeds of New Order were already in their embryonic phase, yet New Order never had a song that contained the lyric “Mother I’ve tried please believe me, I’m doing the best that I can, I’m ashamed of the things I’ve been put through, I’m ashamed of the person I am.” Heart and Soul and the skull-crushingly intense Twenty-Four Hours are absolutely petrifying pieces of music and also showcase the fact that Peter Hook was becoming a very, very good bass player. The Eternal and Decades are songs that sound like they’re being sung from a medieval crypt, under a foggy cemetery, and we can only stand at the top of the spiral staircase and listen to the pain that drifts up, not quite daring to descend. The lyrics are unbelievable. This man was twenty-two years old when this was recorded. These are biblical, statuesque images that can rival anything in The Divine Comedy or Paradise Lost, and only Leonard Cohen has written anything like them in the field of popular music. “Just for one moment I heard somebody call, look beyond the day in hand, there’s nothing there at all.” “Here are the young men, a weight on their shoulders…. We knocked on the door of Hell’s darker chambers, pushed to the limits we dragged ourselves in.”

Ian Curtis hung himself in 1980 at the age of twenty three. Twenty fucking three.

Best Moment: 0:50 into The Eternal; the piano just adds to the weight of a song that is already too much to bare.