Many bands work for their entire careers trying to get a signature sound or score a big hit single that they will always be remembered for. It might not be a sound that makes them well known, it might be a gimmick, memorable music video or their fashion sense. Slash had his top hat, Iron Maiden have ‘Eddie’ and Kiss have their over the top outlandish make-up. Once a sound picks up its own personal sound, they will more than likely find them selves stuck with it, no matter how far they try to remove them selves from it. Their future releases will always be compared to the debut, and they will always be stuck with this monkey on their back.

1. The Bluetones. These fellas were your typical post ‘Brit-pop’ era groups who hit the big time when their debut album ‘Expecting to Fly’ hit the shelves in early 1996. It sold bucket loads and went platinum in the U.K. The first single release off the album was ‘Slight Return’, and with the help of a re-release made it to number 2 in the charts (It was kept off the top spot by Babylon Zoo’s ‘Spaceman’) This brilliant song was their signature, but the whole album (although overlooked) was a cracker. ‘Slight Return’ is more than likely the only song off The Bluetones most people will know, despite them releasing 6 studio albums and 20 singles.

2. Supergrass. Ok, Ok, I know, another ‘Brit-pop’ band, but get used to it ‘cos it’s all I know! Supergrass were a bloody brilliant band, their debut album ‘I should Coco’ made us dream of a carefree life, and our silly youthful ideals made more sense when we listened to it (basically, it rocked!) Many great albums followed containing catchy tunes like ‘Moving’, ‘Grace’ and most memorably for me ‘Late in The Day’ The problem once again with Supergrass (as it was with The Bluetones) is that people couldn’t see past their biggest hit ‘Alright’, with its memorable chorus, guitar solo, and its, ‘of the time’ video, people would always favour and associate them with it.

Supergrass. A photo that proves that Charles Darwin was right.

3. Chumbawamba. Chumbawamba were a group made up of many colourful characters. Their career spanned over 3 decades, where they played punk influenced pop (if there ever could be such a thing) anarchistic music. Their songs often tackled subject matters such as animal rights, feminism and anti-fascism. Unfortunately writing songs about gay liberation and class struggles wasn’t paying the bills. They released their biggest mainstream hit ‘Tubthumping’ in 1997. Unfortunately, their hardcore fans didn’t favour them turning ‘face’. The millstone around their necks was the fact that they had seemed to have ‘sold out’, but they still protested against government, most famously at the 1998 Brit Awards where they changed the lyrics of their biggest hit to protest against the Labour Party’s treatment of the Liverpool Dockers, then going on to throw water over the Deputy Prime Minister John Prescott.

4. The Boo Radleys. Here is an example of a hit single totally obliterating all of a bands previous good work. The Boo Radleys plodded through the early 90’s releasing typical northern guitar music (which isn’t a bad thing) but when they released their 1993 album ‘Giant Steps’ NME magazine awarded 9/10 and hailed it as “…an international masterpiece…”. They then went on to rank it second on their albums of the year (topped only be Bjork’s brilliant ‘Debut’). So things couldn’t have been rosier for the boys from Merseyside. Still relatively unknown , they released ‘Wake Off Boo!’ in the spring in 1995. Unfortunately for these guys, this would be their only hit single, and catchy as it was, it wasn’t a patch on the offerings on ‘Giant Steps’ and became a proverbial albatross on their careers. Things never really picked up them after the summer of 1995.

The Boo Radleys: “They want to use one of our songs in an advert you say? Cool… which one?”

5. The Stone Roses. Now please wait for a minute while I big up these guys, after all, they are in my top 3 bands of all time. They were one of the most pioneering bands of my time. The Stone Roses released only 2 studio albums, but oh what albums they were. Their debut album was and still is considered as one of the greatest openers to a career, and ‘Second Coming’ their follow up, was a change up in style, but always tainted from the off because of the success of their debut (as I have noted previously in this blog here http://wp.me/p38ZXT-cE) The only thing that winds me up about these guys, is the fact any time you talk about the band with others, and ask which is your favourite song of theirs. 9 times out of 10 people will say ‘Fools Gold.’ For me ‘Fools Gold’, great as it is, would barely make it into my top 10 Stone Roses song. People probably say they favour ‘Fools Gold’ because it is played mostly on the radio these days. 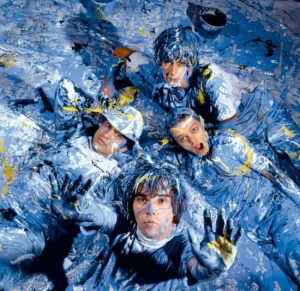 No funny comment. Still one of the greatest bands of all time.

I do hope that when listening to music, you don’t just listen to bands biggest hits. You might just find that you are missing out on the next ‘Giant Steps’ album or ‘Late in the Day’ song.

One thought on “The Monkeys on Their Backs…. By Martyn Taylor”