Leanne Swann is one of my best friends, and one of the top ten best-looking women in East Yorkshire. I met her back when I was twenty years old as part of the Andy’s Records massive, the best job I have ever had. As she will tell you, she is a complete geek, and she has something planned that she wants to tell you about.

Tell the good people a little bit about yourself.

I’m Leanne, I’m 32 and I’m a huge nerd. I’ve worked in caring last four years and have recently started volunteering for ‘we are hull’ as a digital marketer. My top fav films are Labyrinth, The Lost Boys and the Crow. I like dressing up in Cosplay. I love Batman, disturbingly half of my wardrobe now consists of batman branded clothing, so I’d say I’m bordering on obsessive now. I still watch wrestling as I’m yet to have grown out of that one! When I have the spare time I love reading Edgar Allen Poe, i like to draw and I have recently taken up writing thanks to a friend’s inspirational words. And most of all I love music and pretty much have a playlist for everything I do.

You have something planned. What is it?

Yes, I am really excited! Along with a few friends i have arranged a festival called Macmillan Fest.

So, what can we expect to see at this shindig?

A mini Glastonbury really. The venue has a huge beer garden so we plan to utilise this, we have a massive HGV trailer which has been donated as a stage for the day. There will be a BBQ with local fresh produce, a vast amount of alcohol of course, and lots of amazing local bands. It’s set to be an amazing day guaranteed, the only thing we can’t promise is good weather really! But that’s what wellies where invented for right!?

Tell us about the acts that are going to be a part of this?

We have been really lucky in securing some amazing local talent and they are all playing for absolutely nothing! I don’t want to give too much away yet but I can certainly tell you about a few of them.

‘THE BEAUTIFUL HOUSEMARTIN’ with covers from The Housemartins and Beautiful South. He has performed at Hullfest and Hessle Fest.

‘BROKEN GLASS’ are a 5 piece indie rock/alternative band with a female lead singer.

‘THE CHARM OFFENSIVE’ promising something a little bit different providing rock style covers of pop songs. We are excited to have these guys, you’re in for a treat!

‘UNTIL TOMORROW’
Not only will Until Tomorrow be headlining Macmillan Fest but they will also be doing their ALBUM LAUNCH! Until Tomorrow are a Metalcore band based in Beverley. They recently featured on BBC Radio Humberside with their new single ‘April Fool’, a very catchy and energetic tune, not to be missed.

Richard Harries a local performance poet performing some of his comedy poems in between acts.

This sounds like you could make a lot of money from this. Are you looking forward to lining your pockets?

Not at all as it’s for charity we don’t stand to make a penny from this, all funds raised will go direct to the charity. All the bands and staff involved have kindly donating there time for free.

I see. Tell us a little bit about the charity you have chosen.

How wonderful. Give us the details.

The Macmillan Hull and East Riding Campaign is a £1 million pound programme aiming to provide an additional 5 nurses to the area. I recently met with Becky our local Macmillan Manager who told me about this programme. I felt it was important that since the event was local the funds should stay local supporting friends and family who are affected by such an hurendous disease. 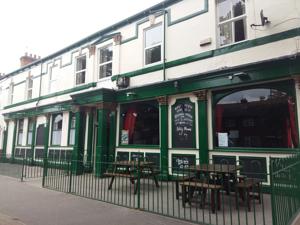 Excellent stuff. Please give us all the links and what not.

We encourage people to like our Facebook page to keep up to date with the event and future band announcements: http://www.facebook.com/macmillanfesthull

Well I’m coming. Is there anything else you’d like to tell us?

That’s great, I look forward to seeing you there! We hope everyone else can pop down too, but for those who can’t I’d encourage them to please stop by our donations page and still show there support: http://www.justgiving.com/fundraising/macmillanfest

Hopefully this will be the first of an annual event that we can look to grow over the coming year so it’s exciting times.

I would just like to say a big thank you to Premier Logistics for donating the trailer, Whiteheads for donating the food, The Loud Mouth Count Pub for letting us use the venue, everyone else that’s helped out along the way he most importantly all the bands involved and it couldn’t go ahead with out them!