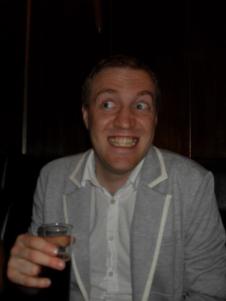 You’re writing for this site because your primary goal in life didn’t work out. What was it?

I always wanted to be a rugby player, but I knackered my knee when I was 15 so gave it up. I also had dreams of been a stand up comedian when I was younger.

Nerdy and competitive. Up until the age of 14 I always had to be the kid that was first to answer questions, after that I stopped giving a shit and just fucked around.

What is your all time favourite

Guerrilla by the Super Furry Animals, every track is faultless and it reminds me of my late teens

Tough call, I don’t think I could pick just one but Platoon or Empire Strikes Back would be up there.

Catch-22 by Joeseph Heller, funny and it makes you think.

British: The young ones, Loved the violence and the swearing when I was a nipper

US: Big bang theory. Nerd humour, right up my street

What’s your most treasured material possession?

My car; Golf mark 2 is the ultimate combination between speed and styling

What is the single best item of clothing you’ve ever owned?

I once owned the same anorak that Gruff Rhys is wearing on the inside cover of Fuzzy logic, I loved it at the time, but looking back it was probably a bit shit

Who is your favourite sportsperson ever?

Eric Cantona, the only player that made me enjoy that boring game

Other than property, what is the most expensive thing you’ve ever bought?

My computer, I’m a nerd what can I say

Who is the funniest person you’ve ever met?

Dan West, if you know him you know why.

Pick five words to describe yourself.

Has there ever been a period in your life that you look back on and think “What the hell was I doing?”

What’s in your pockets right now?

Nothing, I’m sat in my shorts

Only when I’m drunk, When I’m really drunk I have been known to do an impression of Jagger dancing

What are you most likely to complain about in a hotel?

I’m British I don’t complain, I just mutter under my breath

What characteristics do you think you’ve inherited from your parents?

Alcoholism and a sense of humour

What’s your most unpleasant characteristic?

Not being able to admit that I’m wrong

I’ve been told that I cook a mean omelette

What single non-political thing winds you up the most?

People that walk slow. Don’t get me started, I can bitch about that shit for hours

What music would you have played at your funeral?

Hello sunshine by The Furries

Stretch Out and Wait by The Smiths

Many Rivers To Cross by Jimmy Cliff

What do you see when you look in the mirror?

Recite a line of the greatest lyric ever written.

A skirt ascends for a watching eye, it’s a hideous trait (on her mother’s side)

What are your plans for this weekend?

Not much, just a nice general slob around