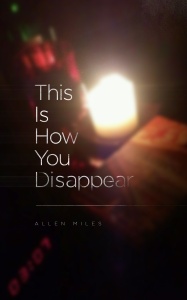 • Would you give us a little info about yourself?
I’m thirty three years old, I have a wife and daughter and mortgage. I look like Ellen Degeneres and dress like a cross between Niles from Frasier and Johnny Marr. I speak English quite well and I work for the NHS. I have a book out, it is called This Is How You Disappear.
• And a bit about your writing process?
My previous novella, 18 Days, was written in five days whilst I was delirious from lack of sleep due to the night-time antics of my new-born daughter. I got an idea in my head and loaded up on coffee and wine and just typed and typed and typed. It was a very dark story and rather draining to write. This one was much easier to write. I took the best part of a year to scribble ten stories and although many of them are still on the bleak side, I actually enjoyed the process. The writing is pretty languid and evocative but with a hard-hitting core. 18 Days was like passing a kidney stone, This Is How You Disappear is like finding a razor blade in a chocolate cake.
• Following on from the success of your last book, how has this helped you and has there been any negatives to tackling your new book of short stories?
I wouldn’t say my last book was successful. It got loads of five-star reviews, but I didn’t make any money from it. Having said that, I wasn’t expecting to, and I didn’t really care if I did. I learnt a lot from the first one; for example it is idiotic to attempt to write 30000 words in five days while working a fifty hour week and attending to a six month-old baby. Writing this one, I attempted to work on my weaknesses, such as dialogue, and I definitely created many more characters. The negatives were keeping the stories short, a few of them run to 10000 words or more, which strictly speaking aren’t short stories.
• Why short stories and not a novel?
I have neither the discipline nor the level of concentration to write a novel. I have one on the back burner, but I’ll write big chunks of it then leave it for ages and forget my train of narrative thought. I will finish it, but it will be when I’ve got less hair and more spare time. It’s said that Martin Scorsese had been waiting twenty years for the right time to do Gangs Of New York, because it was such a monstrous undertaking. It will be the same with my novel.
• Could you tell us a little about your new book?
It is a collection of ten short stories and the afore-mentioned novella. It is my first paperback. It is mostly based on themes of isolation and escapism, and I’ve taken a lot of influence from the writings of Charles Bukowski, John Fante and Cormac McCarthy. The lyrics of Elvis Costello also had a huge influence, as did the life and times of Howard Hughes. I’m immensely proud of it, and the story, Paradise, is the best thing I have ever written. As I say above, I enjoyed writing it, which is really rare for me. My favourite part of the book is called Blue and Yellow Stripes, which is an autobiographical prose about my childhood. All the characters in it are actual people, including my mate’s amazingly cool older brother, my then-best mate’s grandmother who couldn’t speak English, and the whole football team from my primary school.
• Getting published – what have you done?
Long story. I was approached by my friend and mentor Darren Sant who’d read one of my stories, which was tentatively-titled A Night Out, which was a sort-of throwaway comedy story I’d written based on real events. He offered to put it out as an e-book through his fledgling publishing company, but suggested I write another short story as a bonus, to make it worth the price. Sadly, Darren’s would-be partner moved abroad so they decided not to continue with their plans. I was gutted at this because I thought the bonus short that I’d written, which I’d titled This Is How You Disappear, was one of my best pieces. I decided to write a collection of short stories with a view to self-publishing it as an e-book. During this time I’d started my own website, and one of the contributors, a magnificent author called Ryan Bracha, got in touch and asked if I’d like to contribute to an anthology he was curating and publishing called Twelve Mad Men, which I did. A while after, I decided to chance my arm and see if he fancied putting my collection out himself, because frankly I didn’t have the first idea how to do it. To my absolute joy, he said he would, and due to the fact he’s an all-round splendid chap, I’m now sitting here with a paperback volume of my own work in my hands.

Follow Fiona on Twitter @McDroll. Shes very good. I know she looks pretty bored with my waffling, but that’s my fault.

• Have you built on the dark themes from your last book or have you headed in different directions?
Lots of people told me that 18 Days was incredibly dark. My bezzy-mate at work told me she burst into tears at the end, but she does drink a lot of gin so that could’ve been a factor (love you Mel!) I’ve not read it since I finished it so with hindsight I can’t really say, but when I wrote that book I’d completely zoned out and was following a trail, so I didn’t really pick up on it at the time. The stories on this one are quite dark in places, The Holy Dusk Tricolore is particularly upsetting, but there’s certainly a level of black humour in a few of the stories, which I learnt from writing my contribution to the afore-mentioned Twelve Mad Men. The First Aider is particularly malevolent, and it will raise a grin or two. Ditto Nebraska, East Yorkshire, which is the re-write of A Night Out, as mentioned above.
• What improvements do you see in your writing ?
I’ve made a conscious effort to write dialogue, because there was hardly any in 18 Days. I’ve also varied from first person to third person in a few of the stories, and as I’ve said, I’ve tried to inject a bit of humour into it. In many ways, I’ve tried to get away from my own style, if that makes sense.
• What’s next?
I’m going to do lots of promo in order to try and sell copies of my book, have a rest for a while, then carry on with my novel. Hopefully it will be finished before Putin blows the world up.

This Is How You Disappear is published through Abrachadabra Books and is available on Amazon here: http://www.tinyurl.com/disappear2014