If you’re wondering what I’m alluding to, this is it. Forrest Gump had H.I.V. Here’s why.
Let me start this off by giving you a brief summary of the film ‘Forrest Gump’ so that you can see my point at the end.

‘Forrest Gump’ is the story of a man called Forrest Gump (played by Tom Hanks) He was born with a small I.Q, but a large generous heart. He grew up in a town called Greenbow, which is in Alabama. On his first day of school he meets a girl called Jenny (played later by Robin Wright.) The film tells the tales of the lives of these two characters running in parallel with each other. Once they leave school they only meet again on a few occasions. Forrest goes through his life accidentally experiencing and influencing some of the most important men in America. He taught Elvis to swing his hips, influenced John Lennon to write ‘Imagine’ and also accidentally unearthed the ‘Watergate’ scandal that caused Richard Nixon to resign as President. The problem was that he was too stupid to realize the significance of his actions. Forrest becomes rich and famous by, becoming a college football (not soccer) star, fighting in Vietnam, receiving the ‘Congressional Medal of Honour,’ representing the U.S.A in China on the table tennis team, owning a highly successful shrimp boat fishing company and for running across America coast-to-coast several times.

Jenny, on the other hand, lived a much more difficult life. Struggling to settle down, she got caught posing topless while at college, spent time as a ‘singing’ stripper, Experimented in several types of drugs (marijuana, L.S.D, cocaine and heroin among others.) Jenny also has many relationships with many men throughout the film, some are abusive, over-powering and they almost certainly get her hooked on drugs.

After college Forrest and Jenny only meet again a total of four times.

On the third occasion that they meet, Jenny goes to the house that Forrest lives in to stay with him for a while. On the night before she leaves she climbs through his window and makes love with him (as a goodbye gift or as way of thanks, I don’t know.)
Later on in the film Forrest receives a letter from Jenny asking him to come and see her where she is living now. When Forrest arrives at the apartment where Jenny is living a babysitter arrives with Jenny’s son. She proceeds to tell Forrest that he is called Forrest Jr and he is the father from their one night stand together. Jenny also informs Forrest that she is sick and is in fact dying from a mystery virus that the doctors could not diagnose.

Jenny and Forrest move back together to Greenbow where they get married. Jenny dies soon after from the previously mentioned mystery virus. THE END.

Its all very sad, but we are left with the thought that Forrest and Forrest Jr live happily ever after. I am here to burst that bubble now!

Jenny told Forrest that she had a mystery undiagnosed virus. I believe that Jenny had in fact caught H.I.V. As this part of the film was set in the early 80’s, A.I.D’s had only just been discovered and H.I.V was unknown. She may have caught it during her time in the 70’s experimenting with heroin, possibly sharing needles, or she may have caught it from having unprotected sex during this time.

To be fair, I can’t imagine this bloke would pass an STD test either…

Jenny then had unprotected sex with Forrest on the night when Forrest Jr was conceived. She must have passed the virus on to Forrest that night, and during child birth, as the virus was unknown, she most certainly infected Forrest Jr with H.I.V at this time.
Unfortunately for all you romantics out there who thought that Forrest and Forrest Jr lived happily ever after, I’m afraid not. They more than likely suffered a similar fate as Jenny, it was probably a painful death for the pair of them soon after the film had ended. 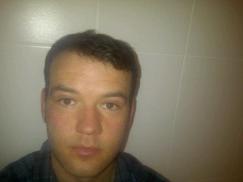