There’s something you need to prepare for, and by this I mean gird your loins, grit your teeth, write crib notes, and insert headphones if you want to survive with your sanity intact when spending time near a TV with your child.

Some programmes are brilliant, something to look forward to even if your sprog has wandered off to hide Lego on the carpet to feed the vacuum cleaner or pierce your feet with later. Worthy of recording to watch even if they’re in a bed and it’s their own.

Mr Bloom’s Nursery is one for straight mums and gay dads, with the fantastically sexy Ben Faulks as a keen gardener of Spitting Image-ish fruit and veg and a magical compostarium (don’t ask). With a broad regional English accent (he’s from Cornwall but studied in Leeds and frankly I can’t place what the accent is and don’t give a salad either way), he wouldn’t be out of place as a dashing young murderer or red herring in Midsomer Murders, but does a grand job of talking to kids like they’re proper people instead of annoying props on his show. 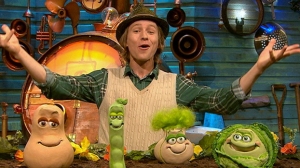 I think Mr Bloom looks like he should be in Ocean Colour Scene. Good to see Heather Small from 90s favourites M-People has found work these days as well.

The Aquabats Super Show, an American import with a young Dave Grohl lookalike, catchy nerd-rock, and fantastical science fiction references for benefit of the parents, is truly glorious and worth youtubing even if you consider yourself above such things. With episodes including “The Floating Eye Of Death” it’s up there with SpongeBob Squarepants (you know it’s the bloke who played The Kurgan in Highlander and a murderous prison guard in The Shawshank Redemption who does the voice for Mr Krabs, right?) for adult-appropriate humour and sheer we-can-bear-to-watch-it-as-a-family-ness.

Abney and Teal is the closest thing my son’s generation is going to get to the brilliance of Bagpuss, and features a comparatively gritty title sequence, copious amounts of porridge, and the voice of the singer from the Noisettes (“Don’t Upset The Rhythm”) and an actor from Gavin & Stacey. It’s easy on the eye and the ear and just a little bit trippy, and quite soothing compared to a lot of the action-packed crap out there.

Ben and Holly’s Little Kingdom is parent-friendly, genuinely funny, and full of scathing asides from the true stars of the piece, Nanny Plum and the Wise Old Elf. The incidental music is addictive, the plots interesting, and the animation acceptable to an ageing adult’s eyes (mine, to be really specific). My husband and I are hoping for a spinoff involving Nanny Plum and the WOE’s wild years which we are convinced involve illicit and inevitably disappointing romantic adventures and piercings of some description.

So far, so good. Nothing really to match the Golden Era of Dungeons & Dragons, Ulysses, Dangermouse, Bagpuss, Terrahawks, Lost Cities of Gold, Thundercats, or Rentaghost, but enough to keep your sprog or sproglette happy while you trawl youtube and Amazon in search of your lost childhood.

This is Zelda from Terrahawks, she eventually hit the big time playing the mother in The Osbournes.

But that’s not all they’re going to see. There are also the programmes that prompt unparental language and a swift suggestion of DVDs/tickling/going out. Heaven help you if your child watches them at school and becomes A Fan – especially with the advent of catchup. Watch them by yourself, check them out, see what I mean.

Nina And The Neurons features a truly lovely scientist (Nina) and her CGI helpers (slightly creepy and wholly inaccurate depictions of neurons voiced by seriously good actors like Siobhan Redmond and Sharon Small) who help her answer common questions about the world around us, like, oh, I dunno, why is the sea salty AND THEN GETS THE ANSWER WRONG. Now it’s not always, or even most of the time, but once was enough – the trust has gone. My husband is a scientist and despite Nina’s niceness, perky bunches, and cool car, her show is now banned in our house. FYI, the sea is not salty just because of erosion of the land (though page after page of google searches would tell you otherwise); deep sea vents spewing minerals like a post-kebab drunk down a drain also play an enormous part.

64 Zoo Lane has a girl buggering off from her house every night to get a somewhat moralistic story from a bunch of zoo animals which are NOT drawn to scale and would probably eat/shag each other (and her) given half the chance. My son loves it and the books, too, but I suspect part of its appeal is the bit of the theme song that, when listing the different attributes of animals, goes “some are slimy” WITH A CARTOON OF SNAKES SLITHERING ON THE SCREEN. For. Fuck’s. Sake. They’re only going to be slimy if you sneeze on them, as I told my son, but he now delights in torturing me with the words “Snakes are slimy!” whenever he wants to get a rise out of me. He’s handled snakes. He knows the song is wrongwrongwrong and yet still, still he torments me.

A recent arrival on Channel 5’s Milkshake (why is their morning children’s programming called that? Why?) is Tickety Toc, a colourful computer animated series about two figures on a clock who have to appear in the real world when the hour chimes, but get into all sorts of problems in between which means there’s always a race to get there when they need to. It’s very cute and has a cheery theme tune (always a bonus), but is horribly stressful to watch, and I can’t help but think ‘FFS stop buggering about and just WAIT NEARBY’ as the tension ramps up and the nailbiting starts.

Luckily, my kid and his dad share a passion for SpongeBob, and he’s happy to watch TimeTeam and the super-sweet and totally barmy Canimals when he’s doing artwork with me, or trawl youtube for videos of animals having baths, toilets exploding, or things to dance to like the Beastie Boys’ Intergalactic and Prefab Sprout’s The King of Rock’n’Roll. One of these days he’ll work out how to use the TV guide himself, but until then these are the things that keep me sane. That and the ‘off’ button. 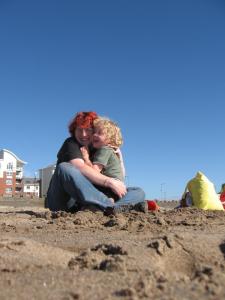