In 1971 Harry Nilsson took an acid tablet. Whilst under the influence of this high he came to the sudden realisation that everything was really pointy. So began the inspiration for one of most unusual albums ever made. The Point is the story of Oblio and his dog Arrow and the adventures they find themselves in.

The Point is a concept album which tells a story. The story is recounted by short narrative links, with Nilsson as narrator, followed by an explanatory song. Now everything in the land of Point where Oblio and Arrow live has a point, including the people. The only exception to this is Oblio who is round headed. This marks him out as different and makes him something of a celebrity. As in today’s society anybody who is different is also ridiculed and sneered at by the usual small minded bigoted idiots. This brings us to the son of the Count who is never named but this lad believes that Oblio should not be allowed to play the national game of triangle toss on account of his round headedness

Think About Your Troubles:

When Oblio agrees to a triangle toss contest to decide if he should be allowed to continue to play he beats the Count’s son 2-1. The Count, who is advisor to the king, is not happy with this he takes steps to get Oblio banished from the land of Point and into the pointless forest. Remember that Count is only one letter removed from c*nt. In the pointless forest, which is not pointless at all, Oblio has lots of adventures with the likes of the pointless man, the fat sisters and the rock man.

The album is aimed at kids but is an entertaining listen for all ages. It explores the idea of diversity in a fun and comical way. Nilsson’s sweet vocals and message of love and tolerance for all folk, whatever their differences is as valid today as it was then. Nilsson was so keen to keep to the pointed theme he even had the record company change a sticker on the album release from a round sticker to a triangular one.

If The Point were written today it’s unlikely it would get past a record company executive. Cynical hard-nosed record companies would not get it. Simon Cowell would no doubt call it ridculous. The man who signed f*cking Zig & Zag to his label! This charming record has something to teach us all and speaks a lot for the diversity of the period it was made. Why not give it a listen? Even you don’t like it then it’s possible your kids just might. 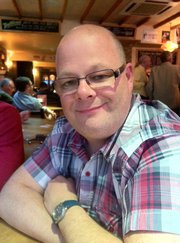 Darren Sant is originally from Stoke but now lives in Hull, he is the editor of hard-hitting fiction site http://www.close2thebone.co.uk/, and he is the author of several books and collections, most notably Tales From The Longcroft Estate. You can check him out at his website http://darrensant-writer.yolasite.com/, and follow his tweets @groovydaz39 & @longcroft_tales