Dave – Boomtown Rats
Most people think Sir Bob, Simon Crowe, Gary Roberts, Pete Briquette, Johnnie Fingers, Gerry Cott where crap. My response is….. bollocks to you. They were the first band I really got into when I was about 13, and still just about one of my favourite bands. Looking after Number One, Mary of the Forth Form and She’s so Modern blew me away. If you get to see a list of all the songs they did its surprising how many top forty hits they had. Dave is one of those that have beautiful lyrics and is a gorgeous song. They played at the Isle of Wight festival this year but no one in my ever decreasing circle of friends wanted to go.

You Dumb F**K – Crackout
Have you ever followed a band from their beginnings’ that you thought were brilliant? I saw these at The Adelphi Club when they were supporting another band who were slightly better known at the time. Crackout had released the album This is really Neat, which was to become critically acclaimed and that fat obnoxious twat from Leeds, Chris Moyles gave their first single You ought to Know some airplay on Radio One. I think it charted at number 72 or something. They even supported Sum 41 on tour and a few others. I thought they would be superstars. I also saw them at Reading. They played in the Radio One / NME tent at about 12.30pm when most of the festival goers were usually either still staring into space or lying in their own filth in a collapsed flooded tent. The arena was packed even at that early time. I suppose some people did listen to Moyles. They lasted a couple of more years then split up. O
The only problem is for me is that no one has heard of them, no one remembers them. Just another band that could have and should have made it. Am I the only person with both their albums? But instead we have to watch the likes of people who look like they have come straight from the grave yard prancing about at places like Glastonbury performing the same songs that they have been singing for over 50 years. What a crap world. Please get a copy of their first album This is really Neat and listen to it. There are a few videos of them on U Tube. Take a bow Steven, Jack, Nicholas.
There was another band, this time from Hull that I thought were good and sometimes very good and could have done something and gone places. I went to quite a few of their gigs and was sometimes around 50% of the audience. Just shows how hard it is to succeed sometimes. Shame.

Poor Misguided Fool – Star Sailor
People slag me off for liking these but what a voice James Walsh has. Some people say its depressing music. So what! Nothing better than listening to this on your own with a bottle or three of wine feeling sorry for yourself when times are bad or sad. Yes we all do it. One of those bands that didn’t produce loads of albums but what they did do was quality.

Freedom – The Housemartins
Hull’s best ever band? Don’t really know. I don’t claim to be a musical encyclopaedia like some but they must be up there. I remember a review in the Sun newspaper on London 0 Hull 4 saying forget the Marxist Christian bullshit just listen the brilliant lyric’s. Probably the only worthwhile statement in that rag for the last 30 years. So this is freedom, they must be joking, they must be joking, they think it’s true. Says it all really.

Dead Leaves and the Dirty Ground – The White Stripes
I dare anyone to disagree that Jack White is a musical genius. Listen to this song and the lyrics. I bet he could sing anything and it would end up covered in stardust. I could have chosen any song from White Blood Cells they are that good. I’ve seen them at the Reading Festival twice, once in the Radio One / NME tent, and once on the main stage. How can only two people hold 30,000 people in their grasp, spellbound for two hours? A genius, nothing less nothing more.

I Am The Mob – Catatonia
Apart from a superb song from a brilliant album there are two reasons for this. When people talk about who they would have for a dinner party if they could choose from anyone, I won’t be choosing from The Pope, Nelson Mandela, The Queen bullshit type of list. I’d have Cerys Matthews every time. What a night that would be. Only problem is would I remember any of it. She has one hell of a pair of lungs on her. A bit of a wasted talent to be honest. Good whilst it lasted. The other rather bizarre reason is that I love anything to do with the mobster / mafia genre. If we were doing a top ten films list they would all be gangster movies. If I could choose what I would come back as after reincarnation it would be a mobster boss. Ultimate power trip.

You’re Beautiful – James Blunt
Don’t laugh, the man is a war hero. Another song writer who has a few good songs but was / is soon forgotten but this is one of those songs that is full of lines that just resonate. Some songs are just simple and beautiful, the type that the music snobs like to have a go at. This song reminds me that the world is full of people who worship, fantasize or who simply stalk beautiful people that are out of their league. Sad but true. I never believed that there was something such as leagues when looking for a partner. And I don’t believe it now either. Some will understand.

Anarchy in the UK –The Sex Pistols
Love it. Stick two fingers up to the establishment every time. Parasites on society. The French had the right idea. But also they were a very good band too. They might now be either older or dead but the songs haven’t aged at all. Still classics. You wonder if today’s kids who follow their “stars” have ever listened to the raw power and feeling a punk rock song can portray.

The Beautiful People – Marilyn Manson
I resisted going to music festivals for years but finally started going to Reading in around 2004. People ask us why we went to Reading and not Leeds which was about 200 miles closer. Simple really, Leeds festival was usually full of northern scum fighting and thieving. Sunday night on the main stage Eminem was headlining and was preceded by Marilyn Manson. They hugged on stage between their sets, something to do with a gay slur. Eminem was crap, and still is, but Manson was simply outstanding. Brilliant, brilliant set. Stood with thousands of Goths in the dark is a scene never to be forgotten.

Territorial Pissings – Nirvana
One of the best song titles ever, closely followed by a song I have just found on my phone called Automatic lover by The Vibrators. God knows where that came from. Never knew it existed.
Of all the people who have died whilst I have graced the earth Kurt Cobain must be one of the most missed. What a genius. What a waste. What a legacy. What a band. He achieved more in his short time that most of us ever will if we live a long enough. Can’t think of a band that had a bigger effect on the way their fans were portrayed. Changed the way grunge was viewed. It wasn’t just a set of dirty misguided youths. This song is from one of the best albums of all time. No dispute possible. 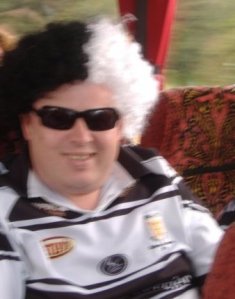 “Who the fuck is David Stothard?” I hear you all asking. He is mister self-deprecation himself, West Hull’s answer to Jack Dee. 47 years old, single and gorgeous. Massive supporter (literally) of both Hull F.C. and Hull City and hater of all glory supporters even if their dads did made them go. Sees religion for what it really is and politicians for the self-publicising greedy bastards they really are. And contrary to popular belief, that film called “The 40 Year Old Virgin” wasn’t about him. Find him tweeting @davyhull22